The investigation of Lone Star College-Kingwood following a 911 call around 1:30 p.m. on 30 January did not find evidence of gunshots or an active shooter anywhere on campus.

Despite this, an official timeline issued by Lone Star College System Chancellor Steve Head describes this initial phone call, which put LSC-Kingwood under lockdown for roughly three hours, as “credible”.

“Even though no physical evidence of gunshots was found, it is important for employees and students to remember that if they see or hear something, to report it to the authorities,” said Head, referencing a note made by Chief Paul Willingham of the Lone Star College Police Department

Even with the lack of physical evidence, several students reported hearing gunshots.

LSC-Kingwood student Grace Warner said she thought the sounds she heard were fireworks.

“Five minutes after I got to class, probably, they told us we were on lockdown and then the alarm started going off,” Warner said.

Other students, such as Victoria Richardson, were more skeptical of these claims.

“One girl two seats down from me was like, ‘I heard some gunshots,’ and I was like, ‘Did you really though?’” Richardson said. “Because, you know, once you get that in your head, you’re kind of like, ‘Oh, maybe I did hear something.’”

A possible source of the alleged gunshots reported by students on campus has been suggested by several more students, including Jared McCormick.

“While I was eating lunch, I saw a car pull out, and [I heard] his engine backfiring constantly, every three seconds,” McCormick said. “It sounded like gunshots.”

McCormick’s theory may be accurate, since Harris County Sheriff Ed Gonzalez responded to a tweet that also reported the car backfiring, saying he was, “thinking that’s what was heard.”

Even though there was no firm evidence to confirm an active shooter, LSC-Kingwood took a cautious approach to the possible threat and sent the school into lockdown.

Student and faculty responses to the lockdown varied widely.

“Honestly, I was nervous,” Rochelly Enamorado said. Enamorado had just walked into the Library building when the lockdown began. “I started to pray. I see a bunch of school shootings in the news and I never really thought I was going to be part of one.”

In contrast to Enamorado’s experience, Professor Richard Almstedt stated that he felt safe during the lockdown.

“I was in FTC 102, which is probably in the safest building on this whole campus because not only is it cinderblock, it’s poured concrete inside the cinderblock, so you would need a bulldozer to get in,” Almstedt said, after being evacuated from the Fitness Training Center.

While in hiding, many students kept their families informed about what was happening.

“I updated my family, let them know what was going on,” said Asiya Ahmed, a student who was in her drama class during the lockdown. “My sister’s not on campus, so she was like, ‘I leave, and this happens!’”

Ahmed described what she experienced from inside the classroom.

“We heard the choppers, and then we also saw a bunch of officers walking around the building,” said Asiya Ahmed. “We could just see their feet from the window.”

Chacy Brooks, a mother interviewed on the scene, received texts from her son, who was in a history class at the time, explaining what was going on.

“He texted me saying, ‘The teacher’s barricading our door. We’re in lockdown,’” she said, while helicopters circled above the campus. “So I thought, ‘Okay, I guess he’s okay. The school’s doing what they should be doing.’”

Mother Ivy White, who had both a son and a daughter on campus during the lockdown, was far more nervous about the situation.

“I was driving like crazy to get here,” White said. “I don’t have to be here because my son has a car, but I still wanted to be here.”

Brooks also expressed satisfaction with the way the police were managing the situation.

According to LSC-Kingwood President Katherine Persson, the students, faculty, and employees knew how to behave in the event of a lockdown, with some areas barricading themselves so well that police had difficulty getting in.

LSC-Kingwood student Raees Fowler described how the police sometimes even had difficulty finding the hidden students and faculty.

“We actually were in there for an hour and thirty minutes and we heard some movement outside, but we had to personally open up the closet and peek our heads out so the police could see us and know we were in the closet to be evacuated,” said Fowler.

President Katherine Persson also reports that between 15 and 20 doors with temporary keys and construction hardware were damaged while police were securing the buildings.

While no one was injured, one student was treated for anxiety and another for a panic attack.

According to LSC System’s Vice-Chancellor of Strategic Priorities Kyle Scott, one of these two students was taken to Kingwood Medical Center for further treatment.

In an email to LSC-Kingwood employees following the evacuation of the campus, President Katherine Persson expressed her thoughts on the situation.

“In situations like this, there will be some chaos in that we cannot plan everything.  Still, we need to improve on the things that are under our control,” she said. “I am thankful for what did not happen today.”

Persson went on to thank the police officers who aided the LSC officers for their service to the campus.

The campus reopened the following morning. 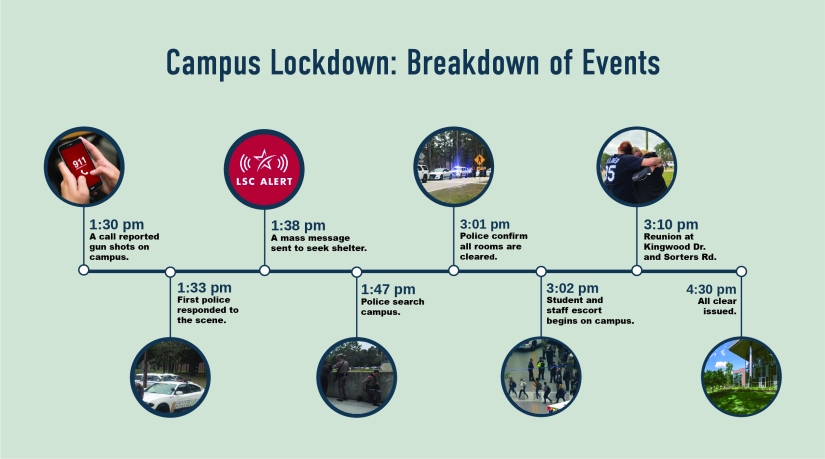