Hurricane Harvey has been a looming cloud for Texans this past year affecting lives, infrastructures and even income.

The recovery not only includes lost homes and displaced families but also unemployment due to closed businesses and government services. Although Harris County and Montgomery County neighbor one another, their rates of recovery are differing vastly.

Due to a large amount of damage concentrated in Harris County, conducting inspections is taking much longer there. Humble’s recovery will take longer than Kingwood’s due to many factors.

First, the volume of damage to infrastructures in Harris County is greater than in Montgomery County because Kingwood has a higher housing market. The estimated damage by FEMA is almost $11 million higher in Kingwood.

Third, applications by county are likely backed up. The collected data represents the comparison of recovery. 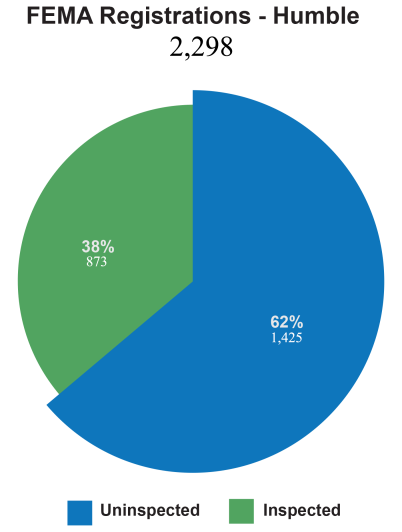 Calculating all the data provided by the federal government, FEMA is appropriately disbursing funds to homeowners in Kingwood and Humble.

Although, at their rate of inspection, owners in Kingwood are being processed at a slightly higher rate than homeowners in Humble. This is likely caused by the number of claims FEMA processes per county.

Federally provided funds intended for recovery will also need to be made readily available by the government. Additionally, natural disaster funds are having to be shared with the victims of Hurricane Maria, which struck Puerto Rico approximately three weeks after Harvey.

According to the reported data, FEMA seems to be distributing funds to those affected by Harvey evenly and without discrimination.

A year later, the recovery from Harvey is still in progress. Government agencies estimate the recovery process can take 10 years because of the extensive damage. Texans are determined to recover quicker because they are Texas strong.